The best part about Siena’s blending of professional training with a broad-based liberal arts education and strong values—is that it works. Our alumni are proof of that. Every year, Siena graduates go out into the world ready to make a great living and live a great life. And that’s because during their college careers, they benefit from an education, experiences and an alumni network that lead to success.

During their time at Siena, Saints intern for impressive employers

Participate In:
More Than 400 Internships Every Year
At Nearly 300 Different Organizations

Lucy was one of only 15 undergraduate students in the U.S. selected to participate in Google’s Information Technology Internship Program this summer. “I couldn’t have gotten to this point without the help of the Computer Science Department here at Siena College, as well as having Dr. Egan and my mother as role models.”

During his internship at the Albany Institute of History & Art, Andrew played a major curatorial role in the creation of a three-part exhibit on the history of baseball in the Capital Region. “I learned a lot about all the different facets involved in putting an exhibit together. I really enjoyed being fully immersed in the process.”

“Siena opened so many doors for me and gave me the tools to be successful. I attribute my success to my advisor, Dr. Brearey, Siena alumni, and the Accounting Department for personally assisting me in my education.”

Class of 2015
Audit Intern at KPMG in Manhattan

Christina went from being an undecided science major to a biochemistry major, securing a prestigious internship at NASA along the way. “I’m looking forward to keeping ties with NASA and going on to graduate school research.”

“Regeneron Pharmaceuticals is continuously seeking talented and motivated individuals to join our organization. We look to recent Siena graduates to become part of our select team known for its scientific excellence in the research, development and manufacturing of pharmaceuticals.”

Megan held three internships over the course of her four years, one which was with Target’s distribution center. “There was a team of about nine men who were engineers…and I was their manager!” She was offered a job before her internship even ended.

And many of our students land jobsClass of 2016: Where are they now?

The average salary after graduation for Siena grads is $10,000 higher than their SUNY counterparts, according to College Scorecard.

After graduating, they all go on to big things

A few graduate schools where Siena grads study next …

And here are some employers where you’ll find siena grads …

“What makes Siena work well is the relationships students can have not just with each other, but with professors, administration and residence life, as well. I am incredibly grateful for so many of the professors that I had at Siena. They were mentors, they were confidants, they were guides.”

“My years at Siena were some of the best of my life. I became my own person and found friends for a lifetime, including my husband Paul.”

"Siena and GE have many connections. We were born and grew up in the same region of New York and Siena alumni have helped GE succeed around the world as hundreds of graduates have become GE leaders. We greatly respect Siena’s leadership in liberal arts education, its strong community spirit and the way it prepares students for a life of service to others.”

“Nestlé will continue to employee Siena graduates. We have been coming to Siena for over 15 years and our proven track record warrants Siena as one of the top colleges for Nestlé recruitment.”

“You hear the phrase ‘out in the real world’ a lot when you’re in college. Siena allowed me to network myself. That opened the door to internships and contacts. Because of those contacts, I landed a reporter job on Long Island (WLNY-TV55) and later at FOX23 News (WXXA) in Albany. Simply put: If you want a well-rounded education that sets you up for success, then Siena College is for you.”

“Not only do Siena graduates have a great work ethic, are ready for challenges, and are enthusiastic about their career path, they also come with a wide variety of business contacts because of their alumni network.” 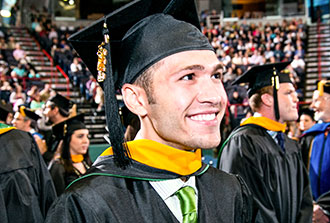 Check out some actual titles …

(And guess what? These grads all started out as undecided!)

Why are Siena grads so successful? Our Students learn to be …

And most importantly, they become part of a community that will be here for them Long After Graduation 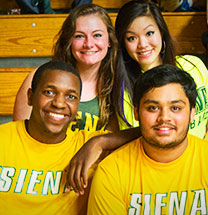 spans the world and Siena grads always have each others’ backs

“The value of a Siena education…PRICELESS!! At Siena, it’s not only the academic piece, it’s the ‘whole’ experience. It’s living in Ryan Hall and getting to know Fr. Larry; it’s playing on the intramural basketball team with all the new friends you have made; it’s traveling to the Times Union Center with your friends to cheer on the basketball team while being part of the ‘Dog Pound’; it’s getting to know your academic advisor as he helps you plot out your course schedule and set up an internship for you. The Siena experience is so much more than going to class. The Siena experience continues to shape who you are and who you become as an adult. One thing is for sure…my son will be a Siena Saint forever!”

“How do you put a value on something that is truly invaluable? An education at Siena goes beyond the classroom. The experiences each student has help bring to the surface the qualities and values within a person, giving them the confidence and preparedness to handle whatever the world has to offer. The changes our in our daughter in her four years were transformational, that is why we are thrilled our son is now at Siena!”

“Siena is providing my son with an opportunity to grow both spiritually and intellectually. The size of the campus, welcoming environment, and sense of family confirm that he is where he supposed to be. As a parent, we could not wish for anything more.”